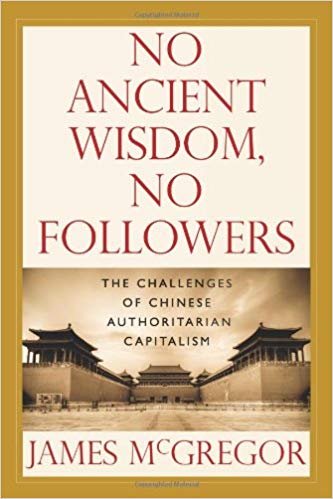 NO ANCIENT WISDOM, NO FOLLOWERS

For free PDF of this book

In three decades, China has risen from near collapse to a powerhouse–upending policy and business conventions across the globe. In this highly readable book, James McGregor offers extensive new research that pulls back the curtain on China’s economic power. Published in 2012, this book explains the economic and political issues that helped influence Chinese President Xi Jinping to pursue his aggressive Made-in-China 2025 and Belt and Road Initiative.

McGregor describes the much-vaunted “China Model” as one of authoritarian capitalism, a unique system that McGregor believes must be radically overhauled for the country to continue its march toward prosperity.  The system is proving incompatible with global trade and business governance, and relying on an outdated investment and export model that’s running out of steam.

The nation must consume more of what it makes.  It must learn to innovate.  It must unleash private enterprise.  And Communist Party bosses must cede their pervasive and smothering hold on economic power to foster the growth, and thus social stability, that they can’t survive without.

As a Tang Dynasty official lamented, China has: “No ancient wisdom, no followers.”  He was describing how the empire was headed alone into dangerous and unchartered waters without any precedent for guidance.

China’s tenth anniversary as a World Trade Organization member last year sparked the idea for this publication. That milestone provided the op- portunity to look back and examine how the Chinese economic system and its interactions with global business and trade have evolved during the country’s first WTO decade. That naturally also led to assessing what lies ahead.

My curiosity was partly personal, driven by the various roles I have played in more than twenty years of living in Beijing and by the diverse vantage points those roles afforded me. I started out as the Wall Street Jour- nal bureau chief chronicling the resurgence of reform in the early 1990s. After shifting to business as chief executive of Dow Jones in China, I served as chairman of the American Chamber of Commerce (AmCham) in 1996 and as a member of

the AmCham board of governors for nearly a decade. Through AmCham and other organizations, I have regularly engaged in policy discussions with US and Chinese government officials. I also jour- neyed to Washington year after year to lobby for Chinese WTO member- ship and fair-minded China policies. In researching and writing my 2005 book, One Billion Customers: Lessons From the Front Lines of Doing Business in China, I was able to gather insights into many industries and companies and their interactions with regulatory authorities.

This publication is also an outgrowth of a study that I authored in 2010: “China’s Drive for Indigenous Innovation—A Web of Industrial Policies.” That report examined the Indigenous Innovation policies that China un- veiled in 2006 and their widespread repercussions. The report garnered con- siderable readership because it connected the dots between the Indigenous Innovation mandates and an array of supporting industrial policies that aimed to protect and empower Chinese state-owned enterprises (SOEs) while reducing China market access for foreign companies. Wound tightly into this web were initiatives to foster “national champion” SOEs and state- supported enterprises (SSEs) that can compete globally against the same multinationals that are often forced to partner with these state companies to obtain China market access.

This publication expands on that study by providing a more complex and holistic view of what has become known as the “China Model” and the network of policies that protect and support SOEs, SSEs, and strategic industries. My research team and I found that while they have been bene- ficial in the past, these policies are increasingly detrimental to China’s do- mestic economic development, international business and trade goals, and its ability to conduct business with and be a trusted partner of foreign multinationals both in China and around the world.

We interviewed many dozens of American, Chinese, and European of- ficials and business people, and pored through hundreds of Chinese and English language news reports, academic studies, and government docu- ments. We drew upon the insightful analysis of China’s Twelfth Five-Year Plan by the Development Research Center of the State Council (DRC), and the “China 2030” study the DRC produced in partnership with the World Bank. We also obtained valuable data and perspective from the land- mark 2011 study “The Nature, Performance and Reform of State-owned Enterprises” by the Unirule Institute of Economics, an independent Chi- nese think tank.

We benefited greatly as well from the books Red Capitalism by Carl Walter and Fraser Howie, The Party by Richard McGregor, and Bad Samar- itans by Ha-Joon Chang; academic studies by Barry Naughton of the Uni- versity of California San Diego, Li-Wen Lin and Curtis J. Milhaupt of Columbia University; and a mountain of materials from the Council on Foreign Relations, the Brookings Institution, the US-China Business Council, and the US Information Technology Office, to name just a few. We also owe a debt of gratitude to the US Chamber of Commerce and APCO Worldwide for their support. The US Chamber provided a seed grant to support the research effort. APCO Worldwide, where I serve as a non-executive senior counselor, allowed me to employ a small team of re- sourceful and tireless researchers. The research and writing of this publica- tion, however, has been independent of both institutions. The narrative, content  choices,  editorial  judgments,  analyses,  and  opinions  are mine alone.

This publication provides a fair but critical examination of Chinese authoritarian capitalism—a system in size and structure that is unique and unlike anything the world has seen. The WTO anniversary is an appro- priate trigger for this inquiry, as WTO membership constitutes the first attempt in China’s long history to comprehensively integrate into global business and trade governance systems.

Conversations about China in business and government circles today are too often flavored and distorted by propaganda, politics, and the pur- suit of profits. In my years of living in China, I have learned that getting the facts on the table is a difficult but important precursor to having con- structive discussions. An honest dialogue between the United States and China—involving government and business—is the only way to avoid mis- understandings and conflict. Transparent, efficient, mutually beneficial, and enforceable dispute resolution systems and trade and investment dia- logues between the United States and China will be key protectors of global economic prosperity for coming decades. I hope this publication helps clear the way.