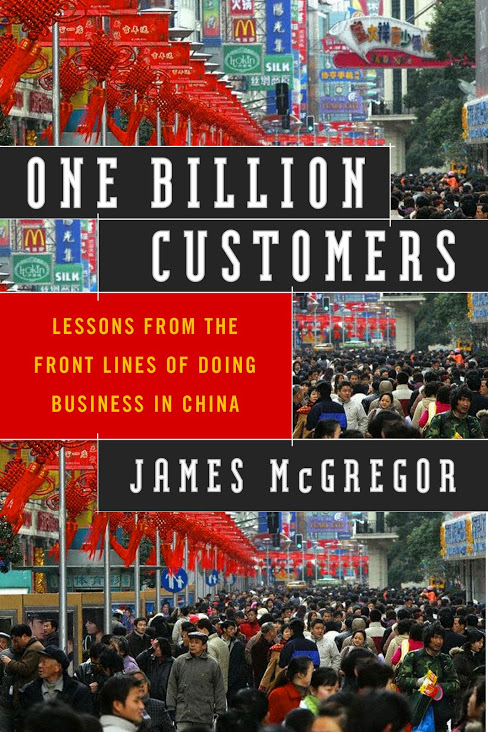 Lessons from the Front Lines of Doing Business in China

Often referred to as ‘the bible for anybody doing business in China,’ One Billion Customers shows how to navigate the often treacherous waters of Chinese deal making. Brilliantly written by a former The Wall Street Journal China bureau chief turned successful corporate executive, the book reveals indispensable, street-smart strategies, tactics, and lessons for succeeding in the world’s fastest growing market. Foreign companies rightly fear that Chinese partners, customers or suppliers will steal their technology or trade secrets or simply pick their pockets. Testy relations between China’s Communist leaders and the U.S. and other democracies can trap foreign companies in a political crossfire. In his three decades in China, McGregor has seen or experienced it all, and now he shares his insights about how China really works

One Billion Customers offers compelling narratives of personalities, business deals, and lessons learned—from Morgan Stanley’s creation of a joint-venture Chinese investment bank to the pleasure dome of a smuggler whose $6 billion operation demonstrates how corruption greases the wheels of Chinese commerce. With nearly one hundred strategies for conducting business in China, this unprecedented account combines practical lessons with the story of China’s remarkable rise to power.

THE TABLE OF CONTENTS

Introduction – A STARTUP AND A TURNAROUND: With one foot firmly in the past, and the other stepping into the future, China is simultaneously the world’s largest startup and turnaround.

Chapter One – THE GRAND BARGAIN: Two hundred years of foreign domination and duplicity have left a residue of suspicion and distrust. Understanding that history is essential to doing business with the Chinese.

Chapter Three – EATING THE EMPEROR’S GRAIN: China’s relationship-driven system is often incompatible with honesty. This peasant tycoon’s journey into the dark heart of China’s endemic corruption shows how it works and outlines your options.

Chapter Four – DANCING WITH THE DINOSAURS: Powerful bureaucratic opponents can be beat if you have China’s interests at heart. Dow Jones and Reuters demonstrate how using China’s own tactics can be useful.

Chapter Five – CAUGHT IN THE CROSSFIRE: Government  lobbying must be a key part of your China business plan, especially for technology companies that might be squeezed between hot competition and the Cold War.

Chapter Six  – THE TRUTH IS NOT ABSOLUTE: The Communist Party believes it must control information to stay in power, but China needs an informed citizenry to compete in a global economy. This leaves the media, from Rupert Murdoch to a crusading Chinese journalist, searching for the size of their cages.

Chapter Seven  – THE BEST LAID PLANS: Government planning and manipulation of foreign companies fueled China’s construction of the world’s largest telecom system. But this saga shows how entrepreneurship and the market can beat the planners.

Chapter Eight – MANAGING THE FUTURE: China is a nation always cramming for final exams, but it will take innovation, not prescribed solutions, to pass the global business test.

It should have been a routine flight from Beijing to the coastal city of Fuzhou. The government-owned airline was new and the airplane was fresh from a foreign factory. But I began to get a sense that this ride wouldn’t be entirely routine when I saw how cheerfully untrained our crew was. The flight attendants sat giggling in the front row, eagerly putting together take-home bags of the best food from the extra meals. The cockpit door was open throughout the flight. The flight engineer came back to snooze in the front row.

Finally we began our descent. The lush green countryside, populated by farm huts and pigpens, loomed closer and closer. As the aircraft swung around to line up on the rapidly approaching runway, two of the flight attendants stood behind the pilot and copilot as if surfing the plane onto the runway. Then, with barely fifty feet between us and the rubber-scarred runway, the pilot suddenly jammed the throttles forward. Engines screaming, we began an abrupt climb. Amazingly, neither of the flight attendants toppled over, but they did stumble back to their seats with a look of fright. Up and around we went, once again lining up on the runway. Then I heard the distinctive eerrrrrrrr of the landing gear being lowered and felt the shuddering as the wheels entered the airstream. I hadn’t noticed any of that on our first approach. So that’s why we did the sudden go-around!

I was thinking about how sensible it was to travel by train as I walked into the terminal. Then I saw a propaganda poster on the wall that has since remained firmly in my mind as the perfect description of the transformation China is undergoing: Strive to Fly Normal. That is the essence of what China is trying to do: become a normal country, one that is integrated into the world economy, a place where citizens can concentrate on their prosperity and happiness instead of suffering from political power struggles. Like our novice flight crew, China has spent that past twenty-five years alternately stumbling and soaring through a massive trial-and-error reform process, and so far most of the landings have been smooth.

It is difficult for anyone in the West to overestimate China’s growing role in the global economy. With 1.3 billion mouths to feed, its consumer market has the potential to be larger than North America and Western Europe combined. Measured by purchasing power parity, China’s current per-capita GDP is $5,000 and rising steadily each year. It has surpassed Britain as the world’s fourth-largest economy. China consumes 25 percent of global steel, 30 percent of cement, and is the world’s largest market for electrical appliances. Foreign companies are flocking here, both to sell and to buy. Contracted foreign investment in China now averages $420 million a day.

Since 1978, when Premier Deng Xiaoping launched a set of economic reforms that included using foreign companies and their capital, technology, and management skills, China has become a manufacturing powerhouse, combining technologically sophisticated factories with energetic, intelligent, and low-cost labor. But China has allowed foreigners in only on its own terms, and those terms are often opaque, contradictory, and bewildering. All too often, laws are only the law when they benefit China. Negotiations can take forever and the resulting agreements can be promptly ignored. Corruption is frequently the lubricant that greases the wheels of commerce. Business in China has always been conducted behind multiple curtains and amid much subterfuge, and that hasn’t changed. Foreign companies rightly fear that Chinese partners, customers, or suppliers will steal their technology or trade secrets or simply pick their pockets.

Testy relations between China’s Communist leaders and the United States and other democracies requires that politics be an integral part of business plans. China’s entry into the World Trade Organization in 2001 and the country’s desire to transform local companies into global leaders is bringing more international practices into China by the day. But I still see foreign executives confidently breeze into China only to be run over by their Chinese competitors, the Chinese government, or their Chinese partners — or sink themselves through various combinations of unrealistic expectations, impatience, and lack of common sense. The more business in China changes, the more it stays the same. As a journalist, I have traveled the entire country and enjoyed a front-row seat for this historic drama. As a businessman, I’ve been involved in the power plays, the complex negotiations, and the political intrigues that are a routine part of doing business in the country.

This book is intended to show rather than tell what it is like to do business in China. There are no simple formulas or magic solutions. Only by showing the sometimes complex details of how certain deals came together or fell apart, how the people involved viewed and treated each other, how politics and prejudices tainted expectations and outcomes, will I be able to convey to you the nuances that have made China such a frustrating yet rewarding place for so many foreign businesses. Each chapter begins with a simple introduction of the characters and situation. Next, in an overview section, I put the characters and situation in their proper context. The story then unfolds as a straightforward narrative. At the end, in a section entitled “What This Means for You,” I explain how what happened in this chapter can affect how you do business in China. Finally, I summarize — pithily, I hope — many of my own observations in a takeoff on Mao’s Little Red Book.

Demographers may quibble with the title: China’s current population is 1.3 billion. But it is the round “billion” that matters, that threshold number that symbolizes the vast and untapped continental-size market, the teeming Chinese masses waiting to be turned into customers, the dream of staggering profits for those who get here first, the hype and hope that has mesmerized foreign merchants and traders for centuries. The title is my tribute to another American journalist-turned-businessman, Carl Crow, who lived in Shanghai for twenty-six years and in 1937 wrote 400 Million Customers, a rich trove of anecdotes and insights about the Chinese people and doing business in China, much of which still holds true today. I share Crow’s deep respect and admiration for, as he put it, “the interesting, exasperating, puzzling, and, almost always, lovable Chinese people.” My goal for this book is to also share Crow’s ability to convey timeless insights and commonsense lessons about Chinese business practices, and the deeply ingrained thinking and behavior patterns of Chinese people, through a combination of scholarship, grassroots experience, lively narrative, and good humor that transports the reader deep into the China business world.

“James McGregor’s knowledge of how business is done in China is extraordinary. As a journalist and businessman, he witnessed firsthand China’s remarkable transformation in the space of two decades from a backward country to a rising economic power. With his extensive hands-on experience in China and his formidable storytelling skills, his book, One Billion Customers, is filled with valuable insights and advice for both knowledgeable business persons and ordinary readers interested in gaining a better understanding of China’s rapidly developing market economy.”

“This is a defining book on how to, and how not to, do business in China. Jim McGregor brings to life the stories of the pioneering American entrepreneurs who, through their efforts, expertise and errors, blazed the trails for the broader business community in one of the world’s most important markets. I strongly recommend it as must-reading for anyone with a stake, an interest or a dream in China.”

“What makes James McGregor’s book such absorbing reading is that he asks the really big questions about China’s current economic boom: Who are China’s new entrepreneurs and how did they get so rich? How independent are they from their own government and bureaucracy? And how and to what extent can Western companies partake of China’s new-found wealth? He gives his answers in a series of lively and admirably detailed case studies of the Chinese business world which make one smile and sigh at the same time.”

— Jonathan Spence, Sterling Professor of History at Yale and author of The Search for Modern China

Time — “His book is the best to date … Our little nugget of wisdom on the China market for those wanting to do business there? Read this book.”

Business Week — “McGregor’s volume is both colorful and cautionary, offering sound prescriptions for Westerners…Those going to seek fortunes [in China] would be well advised to bring McGregor’s One Billion Customers with them.”

Barrons Best Books of 2005 — “McGregor argues that the transition from the Cultural Revolution and the subsequent scramble for capitalistic wealth has scarred China and left it in desperate need of overcoming lingering barriers to growth.”

China Business Review — “In short, McGregor has written a book about doing business in China that seems destined to become a classic.”